Bilingual Daycare: What It Is And The Benefits It Offers 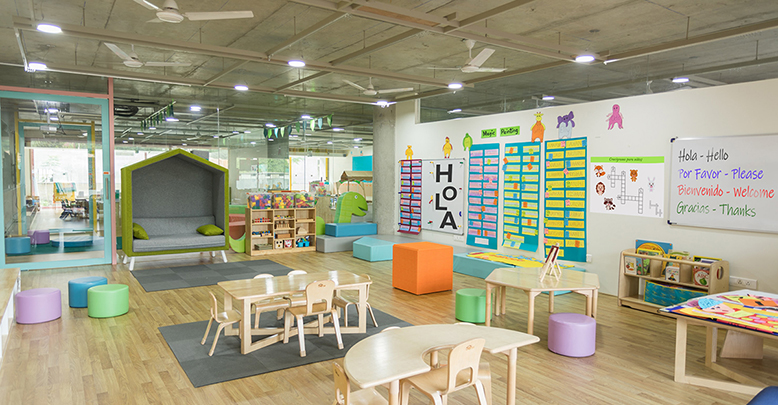 The art of speaking two languages is a highly coveted gift. Unfortunately, many adults shy away from bilingualism because of the challenges it presents. It's for this reason why parents are exposing their kids to a second language in their early childhood. In addition to shaping the architecture of your brain, becoming fluent in a second language promises many cognitive benefits. With that said, it comes as no surprise that bilingual preschools are gaining more popularity.


Much like it sounds, a bilingual preschool consists of instructors who conduct activities in a second language. The parent determines how much time they want their child to devote to learning this language. With a 100 percent immersion program, the second language is spoken throughout the day. Partial immersion involves the instructor speaking the non-native language about half of the time. Meanwhile, two-way immersion combines children of varying backgrounds. The idea here is to use both students' knowledge to get them versed in the opposite dialect.


Studies show that acquiring a second language during early childhood development guarantees numerous long-term benefits. Increased problem-solving skills, heightened creativity, and memory improvement are among the most prominent perks children reap. What's more, some scholars suggest that bilingual children may even boast "superior abilities," ranging from cognitive flexibility to extreme resilience. As if these advantages aren't enticing enough, here are some other ways that children benefit from attending a bilingual preschool.

The ability to change from one dialect to another demands two impressive skills: inhibition and task switching. The latter is a function that psychologists describe as an unconscious shift in attention. The former is both an unconscious and a conscious assessment of behaviors. Together, these skills contribute to cognitive processes that relate to attention.


When these attributes are present, it allows for fewer distractions and multi-tasking. With language learning, children unknowingly develop these traits. As a result, bilinguals outperform monolinguals in flexible thinking and self-control. Above all else, it enables bilingual children to focus more on assignments and duties.

Social cues play a prominent role in language acquisition. Figuring out which dialect to use in a specific setting requires acute senses, which children naturally develop as they steer away from their native tongue. As children continue to hone these senses, their social and emotional skills flourish. When this happens, children begin to understand the theory of mind.


Regarded as the ability to attribute mental states to yourself and others, the theory of mind is a complex skill that can take decades to evolve. However, children who attend bilingual preschool can master this capability at the tender age of three. Being more in tune with both your emotions and others bodes well for greater emotional intelligence. Emotional intelligence breathes understanding into managing emotions, resulting in more positive feelings, less stress, and effective communication.

Reading is one of the backbones of a strong education. Professionals worldwide are strong proponents of learning two languages early on because it encourages students to read. Dual-language education has been shown to promote learning and metalinguistic awareness. In other words, bilingual schooling makes children more mindful of how languages work. Having a more profound understanding of dialects makes reading more enjoyable. With that in mind, it's no wonder bilingual kids are more inspired to read. When compared to monolingual students, Jennifer Steele, a professor at American University, concluded that dual-language students are nearly a year's worth of learning ahead.

English-only classrooms, while effective, have proven less successful in getting children to learn. Moreover, attendance rates are generally lower, there's less parent involvement, and there are more behavioral problems in these settings. To shed light on bilingual education's efficacy, professors at George Mason University have delved deeper into the matter. After going through eight million student records with a fine-tooth comb, Wayne Thomas and Virginia Collier have deduced that bilingual students have better school performance. More specifically, they're happier in school, have higher test scores, and are keen to get involved. These findings reflect how worthwhile bilingual preschool is. While it's certainly possible to find these qualities in monolingual students, it's more likely that a bilingual child will display these characteristics.

When a new language is introduced, the culture that comes with it is also brought forth. For two-way immersion programs, this rings especially true. When English speakers interact with non-English speakers, the classroom becomes more socioeconomically and ethnically balanced. As the varying backgrounds and cultures begin to intertwine, students are more comfortable with diversity. This exposure to the many facets of the world is what makes children more accepting and cultivated.

The methods that bilingual instructors employ are more dynamic than traditional teachings. In essence, they're teaching from a wider variety of angles. Not only does this appeal to children, but it also makes them more curious. Learning a second language can make kids eager to learn, making school fun for both the student and the instructor. This unique style is ideal for children who absorb information quickly. In addition to quenching their thirst for knowledge, it also motivates younger learners to ask more intriguing, intellectual questions.

Most surprisingly, there's a correlation between using two languages and protection against age-related dementia. Researchers discovered that the former group was more advanced when studying the brains of bilingual and monolingual individuals. Even when there was evidence of brain atrophy, the bilingual participants demonstrated a higher understanding and daily functioning level. This is undoubtedly one of the more long-term effects of dual-language education, and it's an astounding revelation backed by science.


The advantages that bilingualism offers are as rewarding as they are favorable. In all the studies that have been conducted on this topic, no adverse effects have been found. If you're considering sending your child to a bilingual preschool, a world of possibilities awaits.

Find a Daycare You Can Trust

How to Help Soothe Your Baby to Sleep From Teething Pain

Why Your Baby Cries When You Lay Them Down to Sleep

The Pros and Cons of Choosing a Daycare with Cameras

4 Wonderful New Ways in Which Daycare Services Have Evolved Today

Affording Daycare For The Average Person

Bilingual Daycare: What It Is And The Benefits It Offers

What to Bring to Daycare

How Childcare Has Been Affected by Covid-19

We do this to understand how visitors use our site and to offer you a more personal experience.
Please see our privacy policy for more information.

Create Account
Daycare Spots © 2022. All trademarks are owned by Daycare Spots Group and only to be used with written authorization.

Daycare Spots © 2019 All trademarks are owned by Daycare Spots Group and only to be used with written authorization.

COMING SOON...
Sign up for the release date
for your state